After Hurricane Sandy pummeled the East Coast in 2012, the destruction to boardwalks along the New Jersey coast and other points along the Eastern seaboard was devastating. As if the stress to the supply chain wasn’t enough, many of these commercial orders specified 2x lumber. Since most Ipe is milled to 1x or 5/4 thickness, these orders were nearly impossible to fill. For decades, 2×4 and 2×6 has been the accepted norm for softer, pressure-treated species; however, due to Ipe’s superior stiffness and other characteristics, 2x Ipe is simply unnecessary. Not only does buying 2x lumber unnecessarily stress the supply chain, especially when demand is high, but it also leads to increased costs.

Understandably, stiffness is an extremely important characteristic in a boardwalk. Builders use a measuring standard known as the design value E, or Modus of Elasticity, to represent how much a given building material will deflect, compared to an applied load; in practical terms, this characteristic relates to the amount of bounce that will occur in response to a load. For decks and boardwalks, this means how much the surface will move in response to foot traffic and how much load would lead to breakage. With the increased expected loads of boardwalks, this issue understandably becomes more significant than it does for a standard residential deck.

Ipe’s Modus of Elasticity is actually double that of pressure-treated Pine, coming in at 3.1 M psi as opposed to 1.5 M psi. So the natural response (and recommendation from structural engineers) would usually be to use half the thickness of Ipe – with longer spacing between joists – in order to achieve the exact same amount of deflection. 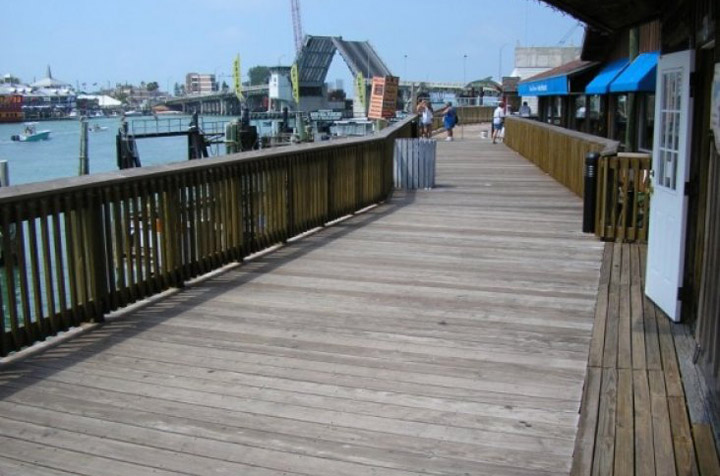 Despite the numbers, when it comes to a high-profile boardwalk, we realize that builders aren’t going to buck the system; it’s just not worth taking a chance. We get that. Overbuilding seems like the safer bet. So why even bring up the issue? We want our Ipe customers to understand that the vast majority of this premium South American species is milled into 1x and 5/4 thicknesses. Structural sizes like 2×4 and 4×4 typically make up the difference. Most residential Ipe decks that use Ipe for more than the actual decking surface use cuts such as 4×4 and 6×6. At the end of the day, that translates into a very small amount of 2×4 and 2×6 Ipe available. As a result, you’ll find that those sizes cost double 1x or 5/4 thicknesses!

So while we get that you might not be okay with using 1x, know that 5/4 thickness will really be just fine. Not only will you benefit by paying less than you would for 2x, but you’ll also be helping alleviate the strain on the supply chain, particularly after a widespread disaster such as Hurricane Sandy. While we can still source 2x Ipe for you, we all need to realize that overbuilding boardwalks comes with higher price tags and longer lead times.