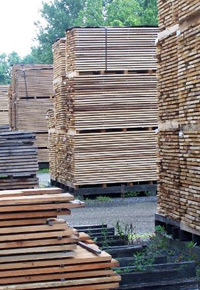 What’s wrong with short boards? The answer may surprise you: Usually even B grade “shorts” actually have fewer flaws than A grade longer boards! So there’s definitely nothing wrong with them! We could make an argument for the fact that there’s something wrong about a grading system that downgrades perfectly good boards simply because of their size, but that’s another issue entirely. The good news is that these short boards end up being a steal for you as a customer.

What, Exactly, Is a “Short” Board?

But let’s back up and define what the term “short” means within the lumber industry. We’re not just talking about 2-foot-long scraps here; short lumber is defined as boards which are shorter than 8 feet long. Most end up being within the 6-to-7-foot range, and the majority of those are over 7 feet long. You should probably know that like many lumber size preferences, the prejudice against so-called short boards is a uniquely American thing. In fact, many U.S. customers request 10-to-12-foot lengths on a routine basis. Europeans, however, build with “short” boards all the time.

Because of the U.S. lumber industry’s preference for longer boards, U.S. sawmills typically cut domestic species in lengths of 8 feet or longer. For the import market, international sawmills produce a decent amount of shorts as well as longer boards, because they know they’ll be salable in the European market. When U.S. wholesalers like J. Gibson McIlvain purchase exotic species such as Sapele or Mahogany, they receive a certain percentage of shorts that come as by-products of the longer boards.

Percentage of Shorts, Based on Species

The percentage of short boards included in an order depends on the availability of that particular species. Genuine Mahogany, for instance, comes from Central and South America, where it takes many mills to fill sizeable requests. Since Mahogany trees are smaller than many other species, a typical shipment of Genuine Mahogany will include up to 20% in short boards. By contrast, African species such as Sapele and Utile grow to be quite large, so containers often include extra lengths and thicknesses as well as wide widths, and only about 5% of each load will be comprised of shorts.

Why You Should Buy Short Lumber Whenever Possible

We realize it isn’t always possible. There is a reasonable demand for 8-foot-long boards and even 10-to-12-foot lumber. But how often will those boards be cut into smaller sizes, anyway? If you purchase the boards already cut to shorter lengths, you can save between 10 and 30% in cost! Knowing that such savings awaits you, you may even want to consider the cost savings as you plan your next job. Your customer will appreciate the savings, and so will the environment, because you’re helping make sure premium lumber doesn’t get wasted.