Hopefully, in our previous series, any fears you had related to tropical hardwood decking were assuaged. Now for the fun part: learning about and deciding on a tropical decking species for your brand new deck! While some people call this season “summer,” we here at J. Gibson McIlvain Lumber affectionately refer to it as “deck-building season.” Our millwork department is spending ¾ of each day grooving decking boards in preparation for hidden fasteners, while several trucks are constantly being loaded with decking, ready to deliver it to job sites across the country.

The majority of the decking boards we sell are, without contest, Ipe decking. But with the rising price of Ipe, we realize that an increasing number of customers are seeking out alternative decking species. Thankfully, there are plenty of great options available, and we are happy to provide them! Since Ipe is so well known, we will compare each of these decking options to that favored species. 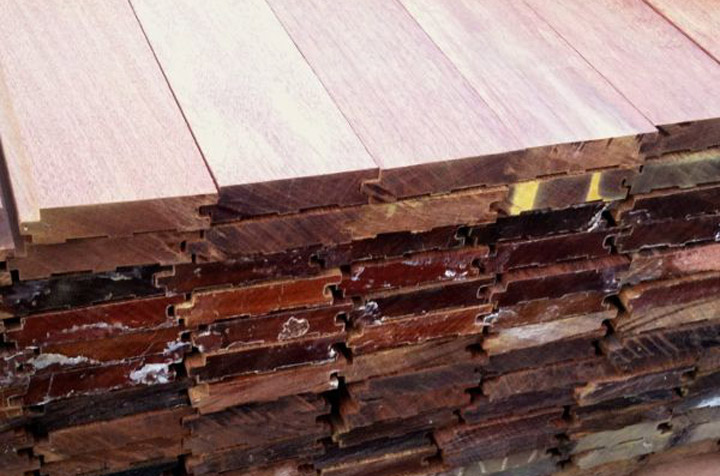 Okay, okay, we said we would describe some alternatives to Ipe and — don’t worry — we will! But since we’ll be comparing their characteristics to Ipe, we figured we really should start with this favorite species. Some might even describe Ipe as being almost magical. Sometimes called “Ironwood,” it has a fire rating like that of cement. Remarkably stable and strong in any location, Ipe does not even need to be dried, allowing it to have a quick turnaround time. Most Ipe comes to us from the mills with which we work with a moisture content of between 12 and 15%. Both exceptionally dense and hard and — as a result — durable, it is suitable for both private residences and public boardwalks. Ipe’s rich, reddish brown color makes it an attractive choice as well. Such a premium lumber species, however, does come with a premium price tag. But really, that’s about the only downside to Ipe.

After Ipe, Cumaru is a definite favorite when it comes to premium hardwood decking. Only slightly softer than Ipe, Cumaru can also be called Brazilian Teak. More popular than the yellow variant, red Cumaru is more commonly used for decking. Unlike Ipe, Cumaru requires careful kiln drying in order to avoid shrinkage and issues with stability. Even still, Cumaru may not be the best choice for a job site in a particularly dry climate, due to these potential issues. Cumaru does boast high density, though, and its reddish brown coloring of the red variant of Cumaru is quite similar to that of Ipe. Typically priced at approximately ⅔ the cost of Ipe, Cumaru is a great stand in, for most locations.

Of course, Cumaru isn’t the only alternative to Ipe, but it’s all we have time for today. Stay tuned for our next post in which we’ll take a peek at a couple more lesser-known tropical hardwood decking options we think you’ll want to consider on your next decking job.